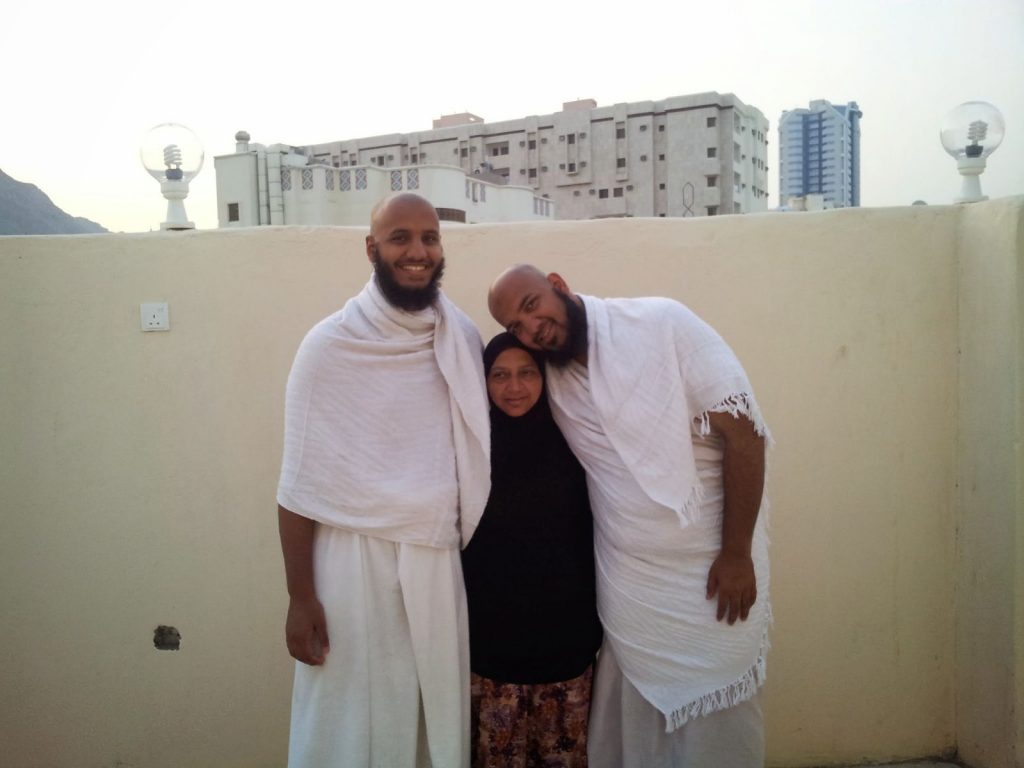 A Grateful Son – In Memory of My Mother

Today marks one year since my beloved mother passed away; the day one of the biggest blessings from Allah was taken away from us. Many people have asked me to write about her but as I would sit and think about her: her devout generosity; her compassionate upbringing; her sacrifice(s); her heart-warming smile, tender gazes and radiant countenance; her motherly reproach and ire; her wisdom, so so many recollections and memories surge that I involuntary tear and realize the difficulty of this task. Today, a year later, before iftar, once again I attempt to put pen to thoughts.

As the one year anniversary of her passing approached, all I could I think about was her sitting on the living room couch, smiling as I would walk through the door. Just a few nights back, while reflecting over that thought, I fell asleep. In the dream I saw myself as a child in a desert on top of a hill crying at the pain of the loss of my mother. Suddenly, to my right I saw a young Prophet Muhammad (peace be upon him) sitting beside me. He pointed ahead and said, “This is where my mother passed away,” and then we sat together on the hill sharing tears.

I consider this dream to be another gift from my mother. She became the reason I was blessed with a few moments with the Prophet (peace be upon him).

Allamah Iqbal so beautifully wrote after the passing of his mother:

I am amazed at the spell your portrait casts,
Which has changed the direction of the flight of time.

Now, who will wait for me, alas! in my homeland?
Who will be anxious when my letter does not arrive?

I shall come to the dust of your grave, bringing this lament.
Now who will remember me in midnight prayers?

Because you brought me up, I shared the fate of the stars;
The house of my forefathers was gifted honor.

In the scroll of existence, your life was a golden page.
Your existence, from beginning to end, was a lesson in religion and life

Throughout my life, your love served me,
And when I was able to serve you, you departed this world. 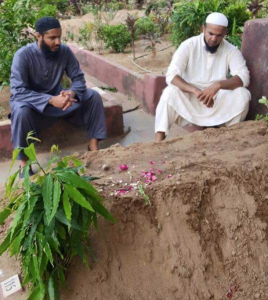 My mother was born as Gheeta Patel on June 17, 1952, to a Hindu family in a small village of Soyani (7 kilometers west of Bardoli, Gujrat, India). Her parents Natu and Rukhi Patel had 7 children, of whom she was the second oldest. Her family was practicing Hinduism, and her community was religiously segregated. When she was 20 years old, she arrived in Chicago in November of 1973, to join her family. Due to miscommunication with her itinerary, she was stranded at the airport, where she met my father, Abdur Razak Kamani. She was inspired by his manners and took an inclination to his religion. Soon after, she accepted Islam and married him. She once told me that she became Muslim so that her kids can be inspired by the character and belief that she saw in my father.

As a child, she had memorized the Bhagavad Gita: a sacred Hindu text. After accepting Islam, she had secretly made the intention to read the book from memory every night before sleeping; if she didn’t adjust to Islam, she could go back to her previous faith. The next day when she woke up, Allah had erased the text from her memory.

She gave birth to five children; 3 boys and 2 girls. She dedicated and sacrificed her life for us so that we could become what she dreamed to accomplish herself. Her eldest son, Rehan, was only six years old when he tragically drowned. It was at this same age that my mother sent my 8-year-old brother Shaykh Mubeen and me overseas to study Islam. Both of my sisters Reshma and Halima spent their early life under her care and now serve the Deen.

During the 15 years that I studied away from home, every time I would call her she would say, “I’m sitting on the sofa, looking at the clock, counting the hours until you come home.” Then when I graduated, she told me to move from our hometown of Elizabethtown, Kentucky to Chicago to serve the community there – once again sending me off. 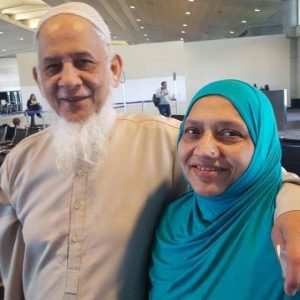 Everyone knew of her generosity, kindness, and never-ending du’as. If someone had done anything for her children, she would make du’a for that person every day in Tahajjud salah. Even though she couldn’t read Arabic, she would read the Qur’an in her mother tongue and hadn’t missed Tahajjud salah in 30 years. Sometimes, she would make certain du’as for me that I never thought I’d be able to live up to and she would say, “Allah will surely listen to your mother.” Her du’as were endless and full of sincerity. After the birth of my kids, I sent each of them to her house for a few weeks at a time, hoping they would be beneficiaries of the same du’as I had received.

She hadn’t visited India in  over 11 years and after her remaining child was married, she fulfilled my father’s lifelong dream to travel to Kashmir, visit family in India, and spend the Holy month of Ramadan in Makkah. When we dropped her off at the airport, I kissed her on the forehead and she said to me,

(If I was ever negligent in your upbringing, please forgive me).

It was on this trip, a few days before Ramadan, a few hours before her flight to Umrah, that she suddenly, yet, peacefully passed away. Thousands of kilometers away, after completing her Tahajjud prayers, making du’a hours long, in the lap of a scholar, surrounded by huffaz reciting for her, with her tongue moist with the Shahadah, she left to meet her beloved Lord.

It was the poetry of Amir Khusru Dehlawi in regards to Kashmir that I constantly think about:

If there is paradise on earth,

She went to visit the paradise of this world as she transitioned to the one in the Hereafter, Allah-willing!

She lived most of her life in a small, isolated town, and when she passed away in a foreign land, only 15 people stood at her grave. She was unknown to the people of the world, but the Angels in the Heavens awaited her. The influence of her sincerity and du’as have reached the corners of the world and will continue through her children. The morning after she passed, my teacher Shaykh Yusuf Motala (may Allah prolong his life) marveled about how Allah chose her from such a small, unknown village and picked her to be a beacon of light for the entire ummah. He said that because of her sacrifice for the Deen, I will find her on the Day of Judgment next to the mothers of Imam Bukhari and Imam Malik.

My father chose for her the name “Radhia,” meaning ‘content,’ and we pray that Allah makes her the recipient of the call:

To the righteous soul, it will be said, “Oh, fully content soul!”

Return to your Lord, content with Him and well-pleasing to Him.

Enter among My [righteous] servants

and enter My paradise.” 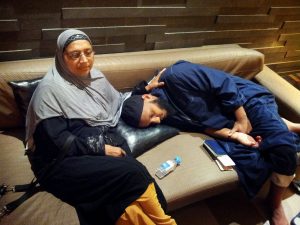